The First New Year’s Celebration Ever 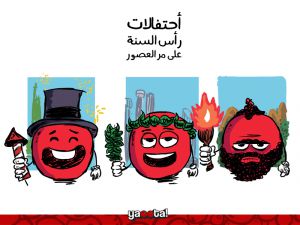 In a few hours, we are celebrating the beginning of a New Year. So it’s about time to say: Happy New Year. But have you ever wondered who were the first people ever to celebrate a New Year?Well, Yaoota had the same question. So we dug deep and got you the answers.

The First people to Ever Celebrate a New Year

The Iraqis in Babylon were the first to celebrate a New Year 4000 years ago. But they celebrated on a different day than the 1st of January because there was no January back then. They celebrated on another day that in our calendar meets the 21st of March. They chose that day because it is the day when the number of day hours are equal to the number of night hours. That is a scientific phenomenon that is now known as the vernal equinox. That day was also the day of the barley harvest and the day when the God of heaven -Murdoch- won the war against the God of the seas -Tiamat- in an old Babylonian myth.

Every civilization ever existed in history had a calendar on its own. That calendar usually starts at a day of a harvest or a day of an astronomical phenomenon. For example, we, the Egyptians, started the New Year at the time of the annual Nile flood and the time when the star Sirius showed in the sky.

Calendars kept changing throughout time. The Romans had a calendar composed of 10 months and started with Spring. Then January and February were added to the calendar and then Julius Cezar had a calendar that is similar to the one we follow today and it is called the Gregorian calendar. Cezar then decided to start the New Year on the 1st of January because the word January is derived from “Janus” the name of the God of Beginnings who has two faces; one looking at the past and the other looking at the future.

So, now we know that the Romans were the first to celebrate New Year on the same day as we do. Since then people start celebrations at the night of December 31 until January 1.

The Romans used to offer tributes to Janus, decorate their houses with branches and hold parties.

As for nowadays, food plays a big part in that celebration, not only for Egyptians but also worldwide.  The Spanish eat 12 grapes by midnight. Each one of the 12 resembles one month of the New Year. Grapes in Spain represent prosperity and good luck.

In Sweden, people have a really nice and delicious game. On the night of a New Year, they eat rice pudding. Inside the pudding, there is only one almond. The first to find the almond will have the best luck in the New Year.

In South America, they eat black-eyed- peas, while the Italian eat lentil. Both foods represent prosperity in their cultures.

Other than food, people celebrate with fireworks. In Times Square New York, a huge New Year’s Eve celebration takes place every year.  The first celebration ever to take place there was almost 100 years ago in 1904. This celebration is probably the most famous celebration in the world.

However, we think that food, fireworks and parties are all secondary. The main and the most common tradition ever for New Year is: the New Year’s resolutions. This tradition surprisingly goes back to the Babylonians as well.

At Yaoota, we hope that this year you achieve all your resolutions and that you have a prosperous, happy and healthy year.