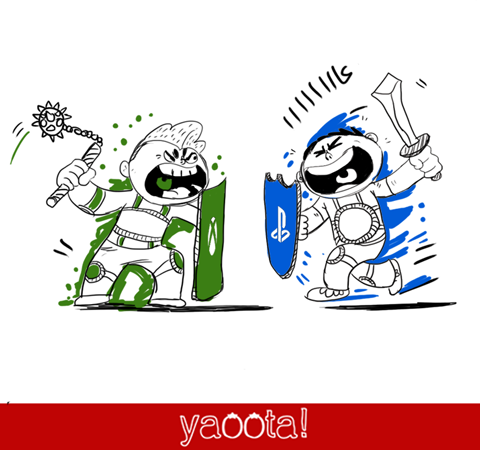 There has always been this eternal debate in any family or friends gathering between the Xbox team and the PS4 team. Both devices have great features but in this article you are the only judge!

Yaoota presents a comparison between the two in terms of design, features, games, and accessories in order to help you win future debates or to make up your mind if you are still confused.

On Yaoota.com, you can find the prices for all gaming devices different stores. Also, you can compare the prices of Xbox One through this link. As for Ps4, you can do the same if you click here.

Getting in shape while having fun is definitely exciting. Now you can play your games with your home game device that senses your movement.

Xbox comes with a Kinect device that easily senses your body movements and position and sends it to the Xbox without the need to hold on to anything in your hand. This comes in handy when you are doing fight or fitness games. With this device, you can effortlessly lose weight while stimulating your circulation and play your favorite games all at the same time.

The set is big and taller than any other home video gaming set. It is too tall that Microsoft advises not to put it vertically. The Xbox One set is divided into two parts and its appearance is solid with no openings at all except for the venting slots. The design is not creative or special.

It comes in a neat design with a curve that makes the design more special. The upper half is shiny and it is definitely slimmer than Xbox. The venting slots are on both sides. It may seem smart to hide the plugs, but this made it difficult in plugging in the cables in the back of the device. You would also notice that that the radiator is at the back side which resulted in a better venting for the device.

It has a plug for internet cable and can also connect through Wi-Fi as well as the old Wi-Fi technology a802.11. It also supports 2.4 Giga Hz channels and the latest 5 Giga Hz that are compatible with double routers.

It has an Internet plug and supports Wi-Fi 802.11. The connection is limited to 2.4 Giga Hz

It starts with 500-gigabyte hard disk and reaches 1 terabyte.

Please know that, if the user replaces the internal disk, they would lose the warranty.

An external memory has to be of 256 gigabyte or more and compatible with USB 3.0

It starts with a hard disc of 500 gigabyte and another model is 1 terabyte.

The user is free to replace the internal disk with a bigger one.

It has two USB outlets, an HDMI out outlet and an HDMI in outlet. It also has an Internet outlet, digital sound outlet, Kinect outlet and an infrared amplifier.

It has two USB 3 outlets, and HDMI outlet and an Internet outlet. As well as Play station Eye outlet and a digital sound outlet.

It has an eight-core processor with a speed of 1.75 Giga Hz, RAM of 8 gigabytes, DDR3 that is not as good as the one for Ps4.

It has an AMD Jaguar eight-core processor of 1.6 Giga Hz speed and a graphics processor Radeon. It also has  RAM of 8 gigabyte GDDR5 and the device is compatible with 86 bit.

It depends on Xbox Live servers to run the games.

It doesn’t require an internet connection at all.

If you are an Xbox One gamer then most probably Killer instinct and Halo are your favorite games.

Tomb Raider plays with an average of 30 frames per second.

Battlefield 4 plays with a quality of 720p.

If you are a fan of Nathan Drake then Ps4 is made for you.

Tomb Raider plays with an average of 60 frames per second.

It starts with EGP 4800 with the Kinect. It would cost EGP 4400 without the Kinect. You can compare process through this link.

It starts at EGP 4000 without accessories.

Adding the accessories and extra controls would add to the price. To compare the prices check this link.

It is the same as the joystick for Xbox 360. However, there are some minor enhancements. You can now hold and control the joystick easier. The distance between the two sticks gives you better control.  There are new buttons added like the button “View” that helps with switching from a scene to another and it smoothly shows the scenes. Also, there is the Menu button that shows the playlist and the playing options.

The Xbox One joystick comes with two AA rechargeable batteries. However, you cannot recharge it with the USB outlet but using a special charger you have to buy. The age of this battery is much longer than the one of Ps4 as it could last for 7 days.

The Dual Shock 4 joystick is convenient and easy to hold. It is much better than its previous version Dual Shock 3. It is also fun to use. Through the share button, you can record a video while playing and take photos that you can later share on social media.

All buttons are easily accessible and you would find new functions in this new version like the unwired sound control and the built-in speaker that comes in handy with games that has strong or interesting sound effects.

The joystick battery lasts for 8 hours of continuous playing and can be recharged through the USB.

It comes with Kinect that has a sensing ability of 1080 megapixels and also supports the infrared which comes in handy in darkness. Kinect is specially designed to accurately sense and respond to your movement, which makes the games simulation much faster and more exciting. This helps the old and the young players to exercise and burn calories instead of sitting for long hours. The Kinect comes for free with the Xbox One. The Kinect also records your heartbeat and takes voice orders and you can take photos of the game.

As for the PlayStation Eye, it doesn’t come with the Ps4 and costs around EGP 400. This is also a sensor and comes with two cameras of 1280p and 800p and four microphones. This gives you an entertaining experience. The device responds to voice orders and you can take photos of the game while playing. There is also a technique that dictates the players and gives each a color and it can recognize the players’ faces.

At the end of the day, the choice varies depending on how you use the device. Both devices have great features, libraries with hundreds of diverse games. The Ps4 joystick is more convenient, but the Xbox Kinect looks great and with the option of adding an external memory, the Xbox One seems like a better option. Ps4 has a neat design and a more reasonable price. Plus the Xbox one is more engaging as the whole family can use it in different ways. These are all consideration to make up your mind.

So as a professional gamer, what would you choose?