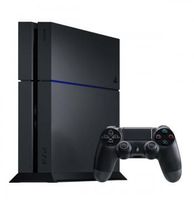 Twenty-two years ago, Sony introduced its Play Station to the world. Since then, it has been developing the gaming device and releasing newer versions, the latest being Play Station 4 (PS4). In this review we will discuss the pros and cons of PS4 and assess whether or not it is the right console for you. All topics will have headlines so if you’re here for something specific please feel free to scroll through the titles to find what you’re looking for.

A work of art has come to us in a new gaming era, which is in dire need of better processors and gaming power. The PS4 is the right choice for this new dilemma. Sony has maintained its simple console design while keeping their core value intact, which is gaming. PS4 does demonstrate many of its predecessor’s features, as well as new ones such as a built in Blu-ray reader for watching HD movies, a new feature called PlayStation Now to show off your gameplay online, an HDMI port and optical ports, better online interactivity, a visually pleasant user friendly interface, Share Play which gives you and your friends an interesting experienced without paying anything at all. It may be a bit more expensive than the Xbox One but it is worth the many outstanding features.

This is Sony’s newest gaming console and undoubtedly the best that has ever come from the respected manufacturer. Its attractive design, angled shape, accented light bar which acts as a status indicator, and its beautiful half gloss half matte finish is nothing short of a master piece in terms of visual aesthetics. Thanks to its small and slim size it can fit just about anywhere. But if you’re obligated to place the console in an exposed position then perhaps you could place it vertically and buy a vertical stand for extra safety. The PS4 can broadcast all game audio (and voice chat) to the audio/mic jack on the DualShock 4, which is compatible with all headphones and mobile headsets using 1/8 inch audio adapters. Sony has also included a very helpful ability which proved very useful, which is the controller being recharged while the console remained on standby.

The Dualshock 4 is Sony’s best controller to date, unlike the Dualshock 3 with its close squishy buttons that would cause discomfort for people with bigger hands. Sony has resolved all of these issues, which maximizes comfort and permits players to play for longer periods without taking breaks to rest their wrists and fingers from cramping up. The PS4 button is situated between the analogues below the speaker to keep you from pressing it involuntarily. The controller may be a bit bigger and heavier than the Dualshock 3 but thanks to this added space it makes it much easier to rest your thumbs on the controller as opposed to suspending them in mid air as with the Dualshock 3. It still vibrates when playing games and crashing into something or when you’re watching cut-scenes in game. The controller emits different colors based on the number of users and their order. The Dualshock 4 hosts a touchpad which can be useful during certain situations, toggling weapons in an FPS ( KillZone: shadow fall) or scrolling through a map ( Assassin’s Creed map screen ). The only issue with Dualshock 4 is its short battery life which ranges from 7-8 hours, this pales in comparison with Dualshock 3, ranging up to 30 hours, so if you’re considering to go for a marathon then you might want to plug in your charger after a six hour mark.

The user interface on the PS4 is different from the PS3′s (Xross Media Bar). It is much better, while operating at the same speed as its predecessor with a lot more flexibility. Sony’s attention to detail has allowed for some minor features to stand out and make the user feel more in control of the system. Now you can temporarily suspend a game by pressing the PS button, and change the display or audio settings without quitting the game in use. Navigating through the PS4’s menus and UI quickly is very refreshing and alleviates the fear of lagging. Another much appreciated feature is the ability to skip the cumbersome yet daunting PS3 user ID/PSN ID and directly download your profile onto the PS4. The console supports greatly improved user switching and its guest feature allows you to temporarily download a PSN profile onto a friend’s PS4 and delete it when logged out. The sheer number of menus and sub menus may get confusing at first but is easily overlooked after more frequent use. One of the aspects that you might find a bit unsettling is the lack of digital library management, every PS4 disc inserted in the console will be downloaded and installed, then it will appear in an endless horizontal line of installed games with no organization at all.

Some fundamental improvements have taken shape to basic network functionality. You can now join a friend’s game from your friends list. PS4 also introduces game independent party chat; this works perfectly for online gamers hoping to avoid annoying lobby audio. A new improvement has been added which includes a feed of your friend’s activity called “What’s New”, and this demonstrates a lot of potential. It shows what games your friends have started to play, when they are live streaming, and lots more! It lists a lot of information and text, which is overwhelming at first glance. The PSN friends limit has been increased to 2,000 which is great and a bit worrisome (why would you need so many friends?) yet you cannot organize them which would make narrowing your friends a lot harder. PlayStation store has also received a bit of care over that of the PS3 but still makes discoverability and organization problematic, a downfall found even in its predecessor. Now Sony is charging for multiplayer gaming, the last console manufacturer expected to start charging its customers. In the past, its free online gaming was its competitive edge, but times are changing.

Setting up the PS4 is smooth and quick. Delays and connectivity issues rely on internet connection. Patches and updates are seamlessly downloaded with no trouble at all, again depending on how big, and on internet connection. Everything seems casual and slightly above average with nothing new except for the added bonus the PS4 has included: the “guest” account. It is mighty helpful and an interesting quality, clearly because you can access your PSN account and play the game in question without having to worry about leaving any unsecured data on your friends’ PlayStation. As soon as you logout everything is deleted as if you were never there.

This is where the PS4 blows its competition away, mostly because Sony has emphasized more on powerful hardware dedicated to gaming. It offers higher resolution for games that were initially played on the PS3, probably an attempt to rectify their mistakes and gain a competitive advantage. I have enjoyed every game on this console with no issues or complications after installing the games I had purchased. The atmosphere you are exposed to is mind blowing. For some inexplicable reason every time I think about playing a game on this console I get a warm gratifying feeling or expectation that it is going to be fun. You could say it is a great method for escaping from your innumerable real life issues. The graphics are exquisite, like watching candy glitter in front of your child like eyes. You do not know what true happiness is until you try this console out with an awesome game to go with it.

Here is a game which you should definitely try out. I am not going to put down the overly suggested GTA V but rather a gore loving classic: Mortal Kombat X. First of all, playing this game on the new PS4 was everything I expected it to be. It is unbelievably fun and you will never tire from tearing your opponents apart limb from limb in front of your very eyes. Nothing could showcase the PS4 in terms of gore galore more than this game.

On launch day I would not have considered buying the PS4, but now it starts at 4,444 EGP, I would definitely buy this without thinking. Just so you understand why it’s a good price, it can basically function just as well as a laptop with roughly the same capabilities and run much better games for a much cheaper price.