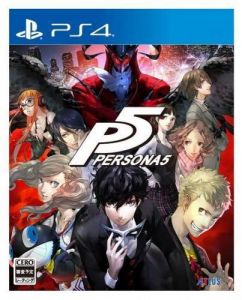 It’s time to talk about one of the most popular games of all time!

If you like RPGs and find yourself enjoying a lot of grinding and farming and an awesome story to go along with it, read ahead, because you will absolutely love Persona 5!

*Prices listed in this article are the ones provided at the time of its publication, and are subject to change according to the supply and demand of the market.

Persona games are JRPGs  (Japanese Role Playing Games). If you’ve played one before, you’ll surely know that they include a few things:

So, What Does Persona Have that Exceeds These Things?

Well, the Persona games have always revolved around a group of school students that have a normal school student life, and at night something sinister happens and they have to step up to save the world, themselves, or the city.

What I mean by this is, this game excels at character development while keeping combat absolutely fresh and entertaining. The daytime is for you to go to school, meet new friends, attend classes, obtain side-missions, and even sometimes take tests or have a day off to hang out with your friends.

As for the night time or after school time, this has a lot of things you can choose to do during: you can fight monsters in dungeons to level up your personas and get better gear for your characters, go home and study to get better grades at school, hang out with friends some more, or even go home and sleep if your character is sick or tired.

So, as you can see, even if you’re new to the series, you can tell that this is a long game with a lot of options and choices to make it throughout the game, which makes it a great time and with a lot of replay-value.

Something also different about Persona is that almost all your choices, even while speaking to anyone in the game, have a significant difference in your gameplay. If you’re nice to someone, they will probably give you stuff; if you’re bad to a person, your relationship will deteriorate.

If you’ve been paying attention, you could notice that relationships are important in this game, and it has always been in Persona games, you have something like a “Social Link” with people you meet, especially playable characters. When these links are grown, by talking to people in your free time after school and making the right choice, they affect how your Personas level up, and you even gain new Personas.

Wait, What’s a Persona, Then?

During the game, especially the combat parts, you will use your special power as the main character, which is called Persona.

Personas are basically monsters, demons, angels, and deities, whatever you want to call them.

You “summon” them to attack your enemies and to become stronger. The more “Social Links” you have upgraded, the stronger your Personas get.

There is character that has the magician link on him. You are nice to him and his Social Link levels up. Now, when you want to make a Magician type Persona, they would be stronger and higher level.

The Basic formula is practically the same, but there are a lot of new additions:

We have demon negotiations back (Yay!) This means you can talk to the demons you fight and convince them to join you or give you things, or sometimes just leave you alone.

Also, you can Combine personas and sacrifice them to make newer, stronger, and different Personas, which honestly brings a LOT to the table.

Dungeons you fight in during the night are very different from any other Persona games: they are now less random and more pre-made, and they now require “platforming” and some puzzles, too, which adds to the dungeons instead of just being a combat area; they become more of a challenge and more rewarding.

Another new addition to the game is the sneak meter on top of the screen. When you sneak up on a monster, you gain first attacks on them, but if they catch you first, they will attack first and that is bad news later in the game, because some enemies will use insta-kill (Hama or Mudo moves) that might kill your main character in one shot. If that happens, you lose. And if that aforementioned sneak meter is down to zero due to you getting caught a lot, you get kicked out of the dungeon.

If you have ever played one of the Persona games before, you already know why!

The game is a lot of fun, with awesome combat systems and a lot of new additions for the old school fans.

For the newcomers, this is a game that offers so much replay value and so many customization options, which in fact makes you feel very in control of the situation.

The game is gorgeous! Whether on PS3 or PS4, the game looks amazing, and the art style is fantastic — honestly, one of the best-looking games this year!

The story is very nice, and for once you’re not some goody two shoes character; you actually have something interesting about you from day one, and you’re an awesome thief like a Robin Hood character that does bad things for good reasons.

The Anime style characters and cut-scenes are amazing; they offer a lot for the game and its players: you have characters that you like and some that you hate and it works very well with the choices system, making your choices matter more to you as a player as well as your characters around you.

Experimenting with Personas and their combinations, getting new weapons, finding all the endings and getting all Personas and completing your Compendium (Persona Storage) to a 100% completion: these are sure to give you at least 60-80 hours of pure, fun, awesome gameplay!

Only if you don’t like JRPGs. The game is long, as I’ve mentioned, and that could be hard for someone who is not used to playing RPGs or JRPGs. But if you enjoy playing long games and having a good, solid, fun storyline to your game, this will be your thing.

This Is My First Persona. What Should I Do?

Alright, here are some tips for the beginners so they can have an easier time during their play through:

This has been my review of Persona 5, one of the best JRPGs this year. It’s simply fantastic!

Visit us here and choose your copy for PS4.

The game is also available for PS3

*Some items may be currently out of stock, but they will be available again soon. If you encounter any similar problem, please comment on the article, or contact us through our Facebook page.